A Guide to Barr’s Redactions to the Mueller Report

The Mueller report has finally been released to the public — at least in part — bringing with it revelations about the great lengths to which Russia went to put Donald Trump in the Oval Office. The report seems to show that although Trump may not have completed the steps to be criminally liable for conspiracy against the United States, he came dangerously close.

But only “some of” the report is available. Much of it is still hidden from view. Barr has redacted key portions of the report, exempting four categories of material that are essentially equivalent to four Freedom of Information Act (FOIA) exemptions.

Given the public’s extraordinary interest in the disclosure of the investigation’s findings, Barr should make every effort to disclose as much of the Mueller report as possible, redacting only what is absolutely necessary. The report seems to punt the determination of whether Trump obstructed justice to Congress for a political remedy, and Barr has said he would make a substantially less redacted version available to certain members of Congress as they contemplate a political remedy. But he said that he would not lift all redactions, or make an unredacted version available to all members.

As Congress moves to determine the correct remedy for Trump’s actions, the American people can finally see for themselves some of what Mueller and his team were investigating. Below, we explain the different justifications Barr has put forward for the redactions in the report, which exemptions Congress will be able to surmount, and whether — generally speaking — Barr should go further to release information within those exemption categories. 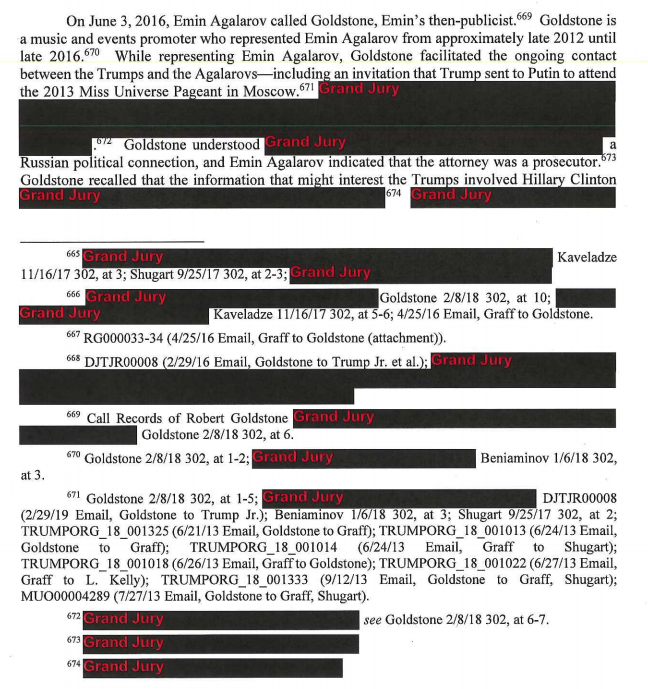 Barr has repeatedly noted that, as he received it, each page of the Mueller report was marked, “may contain material protected under Fed. Crim. P. Rule 6(e).” Rule 6(e) prevents certain individuals, including government attorneys, from disclosing matters that were before a grand jury, including grand jury testimony. These redactions are typically redacted under FOIA Exemption 3, which provides for withholding information when another statute prevents its disclosure.

Although there may be a reasonable basis for withholding Rule 6(e) material, Barr can and should take action to ensure that the public receives as much information as possible, such as ensuring that the 6(e) redactions have been applied as narrowly as possible. The mere fact that a grand jury has seen certain evidence does not prevent that evidence from being disclosed — it only prevents disclosure of information that would reveal the investigation, its deliberations, or its members’ identities.

However, there are two complications to disclosing the information this way. First, Barr has reportedly not gone to the federal judiciary to ask for this accommodation. Second, a federal court of appeals ruled just this month that judges do not have inherent authority to release grand jury material when they deem the public interest requires disclosure. This ruling, which is in tension with previous court decisions, may make it more difficult to gain access to Rule 6(e) material. Even so, Barr should petition a federal judge to permit him to release the grand jury information in the Mueller findings due to the overwhelming public interest in disclosing the report, and transparency groups should be ready to appeal to test the recent appeals court ruling.

Can Congress get the 6(e) materials, even if the public cannot?

Not unless a federal judge approves it. Without court approval, this sort of material is completely protected from disclosure — even to Congress. But Barr, as in the Watergate case mentioned above, could ask a federal judge to give Congress access to the material. Barr has committed to giving a select group in Congress access to other redacted material, but not to grand jury information. And even if federal courts refuse to unseal the grand jury material at issue here, lawmakers could bring the witnesses Mueller interviewed before Congress, and ask for much of the same evidence — essentially replicating the Mueller investigation using the redacted report as a roadmap. 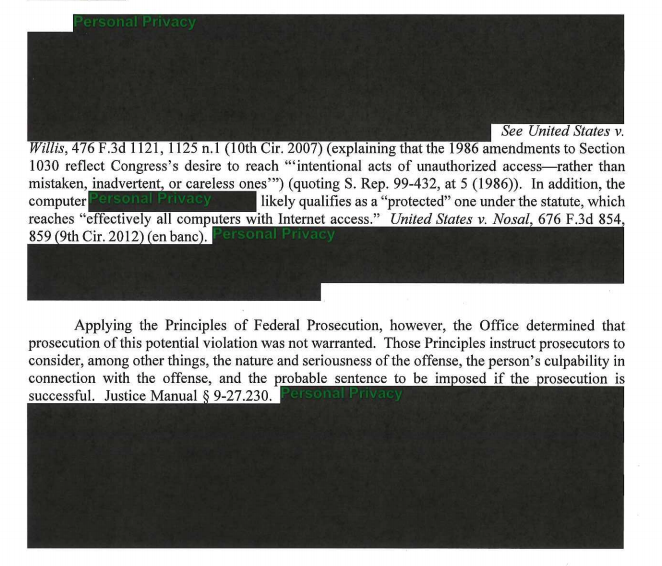 Barr has redacted some information — including, apparently, the identity of certain individuals — on the basis that it is necessary to protect individuals’ privacy. This type of material is sometimes withheld under FOIA Exemptions 6 and 7(C), which are intended to protect privacy interests. Exemption 7(C) exists specifically to protect the privacy of people identified in law enforcement files, and its application is often justified to protect law enforcement informants from harassment and to prevent reputational harm to individuals who have been investigated but ultimately were not charged with a crime.

But both of these exemptions require that the individuals’ privacy interests be weighed against the public interest in disclosure of the information. Here, many of the individuals likely at issue in the report — Roger Stone, Carter Page, and other Trump advisers — have already spoken publicly about their involvement in the campaign and investigation and therefore have diminished privacy interests.

In addition, the public’s interest in understanding the findings of the special counsel’s investigation of Russian interference in a U.S. presidential election — and whether the president and his campaign were involved — is so great that Barr should only redact information under Exemptions 6 and 7(C) in the most limited of circumstances. It is unclear whether Barr has considered the magnitude of that public interest in redacting material under these exemptions.

Can Congress get the information withheld under privacy protections?

Likely yes. While this material may not be publicly released, Congress may request to see the material withheld under these exemptions. The Department of Justice will often accommodate Congress by permitting congressional investigators to view the material “in camera,” meaning Congress will have the ability to view, but not take possession of, a version of the report without these redactions.

Barr has withheld some information on the basis that it would disclose “investigative techniques” or “sources and methods.” This appears to indicate that Barr is justifying withholding this information on the grounds that it is classified material, which is often withheld under FOIA Exemption 1. Classified information is regularly and routinely protected from public view, as disclosing it could put intelligence operations and personnel in harm’s way. We expect there is legitimately classified information in the report — Mueller’s investigation was at heart a counterintelligence probe, examining the relationship between Russian election interference and Trump campaign associates. Barr’s initial letter does not mention the counterintelligence findings — that is, whether Trump or those around him were compromised by a hostile foreign power, and to what extent.

However, if some of this information has already been disclosed by the government — or “officially acknowledged” — Barr should release additional information to the public if the information is no longer truly secret and disclosure wouldn’t cause harm to national security or foreign policy. In addition, Barr could request certain information to be declassified. The attorney general has original classification authority, and therefore could choose to declassify some information. The FBI did this with respect to the Carter Page FISA warrant that it released to Congress last year. Though much of those materials were originally classified, the administration decided to declassify sensitive materials related to Page and the Mueller probe. Barr could do the same here.

Can Congress see the classified information?

Yes. Even if Barr decides not to declassify the materials, the Intelligence committees in Congress have the right to request and view the materials. Those committees routinely view classified information and are well-equipped to investigate while protecting sensitive sources and methods. 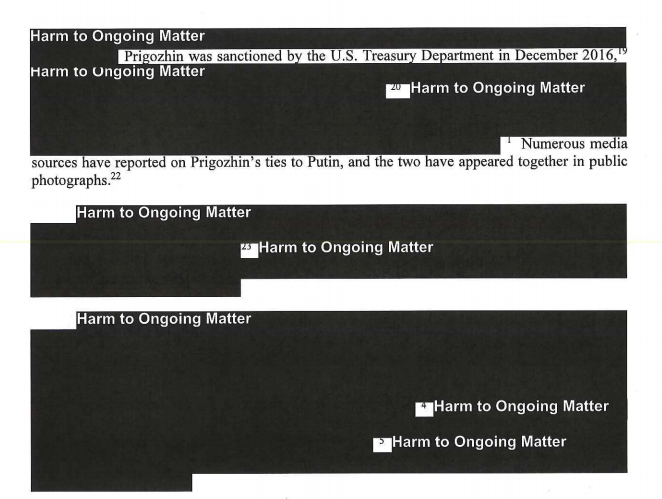 Barr’s redactions of some portions of the report on the basis that they would cause harm to ongoing matters, material usually withheld under FOIA Exemption 7(A), are particularly telling. Exemption 7(A) allows the government to withhold information that could interfere with ongoing investigations or prosecutions. Even though Mueller has concluded his work, his investigation spun off several other continuing investigations that are to be prosecuted by other parts of the Justice Department, such as the U.S. Attorney for the Southern District of New York.

Barr and the Justice Department, however, will at some point have to identify to various requesters the ongoing investigations that could be harmed to keep this information from being released. And Barr can’t keep this information from the public forever. Once the relevant investigations and prosecutions conclude, the government won’t be able to justify withholding it.

Can Congress see material at issue in ongoing investigations?

Likely yes. There is precedent for Congress receiving material that is part of ongoing investigations. While there is concern with congressional oversight interfering with ongoing law enforcement investigations, there are numerous instances of the Justice Department being forced to turn over materials at issue in pending investigations, from the Teapot Dome scandal to Watergate. This is in part because Congress has the right to investigate the government’s conduct in criminal and civil litigation, and Congress’ oversight responsibilities do not diminish simply because the executive branch’s investigation is ongoing.