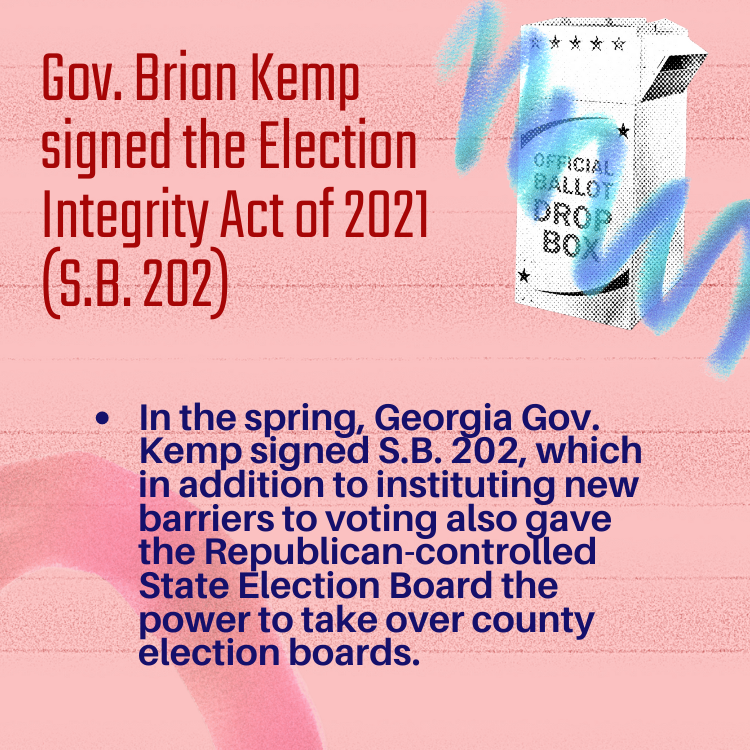 In the spring of 2021, amid unfounded claims of widespread voter fraud and the resulting partisan push for stringent voting restrictions, Georgia passed the Election Integrity Act of 2021 (S.B. 202). The law, signed by Gov. Brian Kemp on March 25, contained several new voting restrictions, including changes to early and absentee voting and reductions to the number of ballot drop boxes. But voting-rights advocates expressed particular concern about a provision that gave the Republican-controlled State Election Board the power to take over county election boards, fearing that it could be used to target largely Democratic counties and entrench a new iteration of voter suppression at the local level.

In an echo of S.B. 202’s takeover provision, counties across Georgia have also seen numerous, primarily Republican-led moves to restructure local election boards. For example, Republican state legislators passed county-specific bills to create a new five-member election board in Troup County, to “reconstitute and reestablish” the board of Stephens County, and to expand the Carroll County board from three to five members; all those bills were signed into law by Kemp.

According to voting-rights group Fair Fight, in 2021, state lawmakers introduced legislation in 10 counties to modify some aspect of their election boards, such as the composition of members or the rules by which members are appointed; bills were enacted by the General Assembly in eight of those counties. Early reporting from the New York Times found that advocates were concerned these efforts would target Democratic officials as well as board members of color.

American Oversight has obtained records showing backlash among county-level election officials against efforts to give partisan actors control over the administration of elections across the state. The records provide an inside look at the flurry of bills introduced in the spring of 2021 that sought to alter the composition of local election boards, including in Spalding, Pickens, Lincoln, and Pierce counties.

Records from Spalding County include conversations from the spring of 2021 among officials who expressed concern and frustration about one such law, saying they felt blindsided by its sudden development. That bill, H.B. 769, was passed in April and revised the composition of the county’s Board of Elections, which leaned Democratic, by replacing the board’s fifth member with an appointee selected by a majority of county judges.

On Feb. 11, a month prior to H.B. 769’s introduction, Spalding County Board of Commissioners member Gwen Flowers-Taylor responded to a press inquiry about the plans to introduce a bill regarding the election board: “I have the background on this,” she wrote.

But other emails indicate that some county officials were not given advance notice. “To our knowledge, no one on this Board was involved with this legislation,” County Clerk Kathy Gibson said on April 9, prior to Kemp’s signature, in response to an email from a journalist.

“The Spalding County Board of Commissioners did not request any legislation with regard to the Elections Office,” Gibson wrote. “We learned about the legislation through an email from the [Association of County Commissioners of Georgia] advising there was legislation on the floor that would have an effect on our County.”

Emails also reveal election officials’ displeasure with the bill. In a March 18 email to H.B. 769’s legislative sponsors, one Spalding County poll manager praised the current election supervisor and criticized the proposed provision in the bill that would require the supervisor to live in Spalding County. “I am sorry that you have created this piece of legislation to try to punish our local elections board and supervisor for the Republican loss in both November and January,” they wrote.

Pickens County
Records American Oversight previously obtained from Pickens County revealed that the county election board also protested against proposed changes, which appear to have been developed by the county’s state legislative delegation along with the Board of Commissioners. In emails, county officials criticized state Rep. Rick Jasperse, the sponsor of board-restructuring bills H.B. 682 and H.B. 683, calling his bill “unjust.”

“What I can’t understand is how is this LEGAL?!” wrote election board member Tara Cannon on March 11. “How can he get away with disbanding all of us?!” Election Supervisor Julianne Roberts replied, “He knows we didn’t do anything illegal.” In April, Roberts resigned from her position, citing the bills, which went into effect in early May.

Lincoln County
Records from other counties detail similar efforts to restructure election boards. For instance, Lincoln County underwent a restructuring that was prompted by the county’s Republican-majority Board of Commissioners, according to Fair Fight. In a Jan. 27 email, D. Stuart Morelli, a lawyer in the General Assembly’s Legislative Counsel Office, reviewed the commissioners’ proposed changes and pointed out some potential legal issues. One was that the proposal for the county Democratic and Republican parties to appoint one member each might contradict a Georgia Supreme Court decision from a few years before. Morelli also said the proposal to end the current board members’ terms early could violate a law requiring that members be given a hearing before the Board of Commissioners prior to termination.

To resolve these issues, Morelli suggested a few options: First, political parties could nominate a list of members instead of directly appointing them, and have the Board of Commissioners make the appointments. Second, current election board members could finish serving their terms before being replaced, or the current law could be repealed and the General Assembly could then adopt a new local act establishing a new elections board. “By repeal[ing] the current Act and establishing a new board of elections Act,” Morelli elaborated, “you would probably avoid the current board members [claiming] a legal right to their office.”

On Feb. 11, the Board of Commissioners unanimously voted to request that the General Assembly abolish the existing elections board and create a law establishing a new one. On March 9, county officials were notified that S.B. 282 and S.B. 283 were introduced in the General Assembly — these bills, which disbanded and reestablished the Lincoln County Board of Elections, were enacted in May.

Pierce County
Records from Pierce County tell a slightly different story, with efforts to restructure the local elections board having come from the board itself. The proposed change — for the county’s grand jury to appoint the majority of the board, with political parties appointing one member each — was approved during a Feb. 17 meeting that the local Blackshear Times reported had not been open to the public or reported to the local press, in violation of the Georgia Open Meetings Act.

In an email sent on March 18, Commissioner Harold Rozier asked County Manager Jason Rubenbauer, “What we need to know now is who initiated this request for change from the Elections Board to begin with, and why.” The records obtained by American Oversight do not include a response answering his question. Opposition also came from the county’s political parties, which at the time appointed two board members each. The parties were “not necessarily opposed to the change,” said Rubenbauer, but felt “blindsided.” Ultimately, the legislation was shelved and the board underwent no changes in 2021.

Elsewhere in Georgia
Fulton County, home to Atlanta, is currently under the state’s microscope after having faced heightened and conspiracy-influenced scrutiny from Trump and his supporters following the 2020 election. In early November, the county, which is facing a possible takeover by the State Election Board, held a mayoral election that was subject to S.B. 202’s stringent new requirements regarding ballot counting. County election officials reportedly struggled to disclose by the election night deadline data on how many ballots were cast. Such violations could result in the ousting of the majority-Democratic election board, which is currently under performance review. The county’s election chief announced his resignation the day after the election, after facing a year of relentless attacks from Trump supporters.

Republican senators also introduced legislation seeking to nearly double the size of Gwinnett County’s Board of Commissioners. The Atlanta Journal-Constitution reported that the bill was pushed without input from Democratic colleagues, and came a year after Democrats gained full control of the board in the 2020 election. While the bill was temporarily dropped, its sponsors plan to reintroduce the effort in next year’s session.

Threats to Democracy
Georgia saw record turnout in 2020, which propelled Joe Biden to victory in the state. And while top officials in Georgia, including Secretary of State Brad Raffensperger and elections official Gabriel Sterling, denied Trump’s claims of a fraudulent election, they voiced support for S.B. 202’s new voting restrictions. Such measures not only make it more difficult for people to participate in democracy, but also undermine public confidence in the electoral process, feeding into Trump’s dangerous lies of a stolen election.

Georgia is not the only state in which partisan actors are attempting to seize control over local election processes. According to the States United Democracy Center, by June 2021, state legislatures introduced more than 200 bills that would interfere with election administration. In Michigan, Republicans have been replacing county election officials with newcomers who support election conspiracy theories, and other states across the country have seen numerous efforts to implement obstacles to voting, from signature verification for ballots in Texas to expansive voting restrictions in Iowa.

To learn more about American Oversight’s work uncovering efforts to undermine elections, visit our investigation pages about voting rights and threats to democracy.

News Roundup: Fighting for Our Democracy — and Winning

From Voter-Fraud Myths to Bogus Election Audits: The Evolution of the Big Lie

New Report: How the Arizona Election ‘Audit’ Has Already Been Compromised
Arizona Senate

News Roundup: A Victory for Transparency in Arizona
Arizona Senate

News Roundup: The Battles for the Last Election and the Next One