As former top Trump administration officials search for new roles outside of government, one such political appointee — Gene Hamilton, who held prominent positions in the Departments of Homeland Security and Justice — has been involved in the creation of a new conservative group led by former White House Senior Adviser Stephen Miller.

The organization, America First Legal, aims to organize Republican attorneys general to mount legal challenges to Biden administration policies. Hamilton is expected to spearhead the group’s legal efforts, which have so far included a lawsuit claiming that the American Rescue Plan Act discriminates against white ranchers and another attempting to prevent President Biden from softening border restrictions.

Hamilton, often working behind the scenes, was an influential player in the Trump administration’s immigration policy. In an October 2017 deposition, later obtained by  the New Yorker, Hamilton  said that he had been the Trump transition team’s “lead on development of all immigration-policy issues.” After Trump’s inauguration, Hamilton went to work at the Department of Homeland Security, and in late 2017 he became an aide to then-Attorney General Jeff Sessions. While working for the Trump administration, Hamilton  was instrumental in setting refugee caps at historic lows and in ending Temporary Protected Status for people from Sudan and South Sudan in 2017. He is credited with writing the memo that ended Deferred Action for Childhood Arrivals, and a recent report by the DOJ inspector general named him as a key player in the “zero tolerance” policy that resulted in separating hundreds of children from their families.

Previously, American Oversight reported on records obtained through Freedom of Information Act litigation that reveal frequent contact between Hamilton and Miller during the height of family separation. While Miller is often cited as the architect of Trump’s most severe anti-immigration policies, it’s clear that Hamilton’s role was equally crucial in enacting that agenda.

In his new role with America First Legal, Hamilton joins an extensive network of pressure groups attempting to prevent the Biden administration from rolling back the immigration policies that he helped create.

He is no stranger to this community. While he was working in the Trump administration, as American Oversight has previously reported, Hamilton maintained contact with many such anti-immigrant groups. He granted them a high level of access: agreeing to organize meetings, to share data, and to discuss policy.

One such contact was Maria Espinoza, who founded the Remembrance Project, which has been designated as a hate group by the Southern Poverty Law Center (SPLC). The group has pushed a false narrative linking immigration to crime, purporting to advocate for victims of crimes committed by undocumented immigrants. In the last decade, Espinoza has aligned herself with white nationalist and nativist organizations.

In a March 2017 email, Espinoza thanked Hamilton for setting up a meeting with then-DHS Secretary John Kelly, which she called “an exciting first step in what we believe will be a great partnership.” Espinoza listed several of the “action items” that had been discussed, including information on “the “scale of illegal alien crime” and potential grants to “help fund our pro-Trump agenda.” 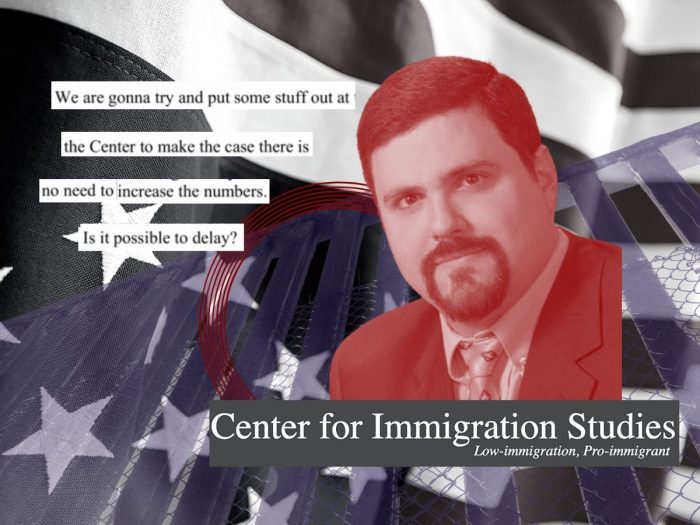 Another far-right contact of Hamilton who appears in documents uncovered by American Oversight is Steven Camarota, the research director of CIS, which has also emphasized a spurious connection between immigrants and crime and has been designated as a hate group by the SPLC.

In July 2017, Camarota emailed Hamilton and asked if the administration could “delay” an announcement regarding a temporary increase in new H-2B temporary worker visas so that CIS could “put some stuff out” to argue that there was “no need” for the expansion. The government appears to have adopted the group’s desired timing on the announcement, allowing CIS to publish materials referencing a policy change that was coming “any day.”

In the following months, Hamilton maintained other contacts at CIS. In January 2018, he sent an email indicating that he was planning to meet with the CIS Executive Director Mark Krikorian and Art Arthur, a resident fellow. He said that they would be joined by James McHenry, who was serving as director of the Executive Office of Immigration Review, and Devin O’Malley, who was then a Justice Department spokesman.

In addition, Hamilton appears to have been acquainted with numerous employees of the conservative Heritage Foundation. In February 2019, he scheduled a meeting with James Jay Carafano, the vice president of the foundation’s Institute for National Security and Foreign Policy. The next month, Carafano invited Hamilton to have a “sit down with our team that works on immigration security issues” in order to have an “open off the record discussion.” Hamilton appears to have accepted the invitation. In April, Carafano sent Hamilton a link to an opinion piece he wrote for Fox News that claimed undocumented immigrants come with a “big sticker price” of “providing public services” and that sanctuary cities have served as “magnets for criminals.” (Each of these claims has been contested by research.)

In August 2019, Hamilton received an email from Paul Winfree, director of Heritage’s Institute for Economic Policy, copying Norbert Michel, director of Heritage’s Center for Data Analysis. Winfree noted that Michel had “questions about data regarding visas.” Hamilton set up a meeting with Michel later that month, and he told Winfree that they should “plan on catching up soon.”

Hamilton’s relationship with the Heritage Foundation has continued. In March, he participated in a panel discussion on the “Biden border crisis” hosted by Carafano, alongside Texas Attorney General Ken Paxton and Rep. Tom McClintock of California.

American Oversight also obtained records showing that Hamilton corresponded with members of the Federalist Society, a conservative organization that exercises enormous influence on the courts. In March 2019, Vice President and General Counsel Dean Reuter emailed Hamilton, asking for a “chance to discuss some immigration issues.” Hamilton agreed, and they met for lunch later that month.

In March 2020 Email to Azar, Nielsen Recommended Company That DHS Had Used to Conduct DNA Testing at the Border
Department of Health and Human Services, Department of Homeland Security

In the Documents: Stephen Miller Emails with Justice Department Official About Anti-Immigration Measures
Department of Justice

Photos from Inside Detention Centers for Migrant Children
Department of Health and Human Services, HHS - Administration for Children and Families, HHS Office of the Inspector General

News Roundup: More Troops at the Border Means More Questions for the Administration
Department of Defense, Department of Homeland Security

News Roundup: The Administration’s Misleading Claims About Terrorists at the Southern Border
Department of Homeland Security

Countdown to Oversight in 2019