Since early 2017, White House aide Stephen Miller and his allies across the administration have consistently pushed hardline immigration policies, including family separation and the travel ban, that have torn families apart and violated international norms. Those policies continue to have a devastating human impact that will long outlast the now lame-duck Trump administration: This month, NBC News reported that the government couldn’t find the parents of 666 of the migrant children separated from their families.

American Oversight’s Freedom of Information Act requests and litigation have uncovered new records regarding Miller’s involvement in the development and execution of such policies, including communications between Miller and agency officials at the Departments of Justice and Health and Human Services. These records, which have been added to our ongoing timelines documenting Miller’s influence and the family-separation policy, provide additional details about Miller’s efforts.

Miller worked for then-Sen. Jeff Sessions prior to entering Trump’s orbit. Leaked emails from 2016 reviewed by the Southern Poverty Law Center (SPLC) revealed his affinity for promoting white nationalist and racist immigration messaging. A recent American Oversight review details how once in the White House, Miller and his administration allies were frequently in contact with members of anti-immigrant extremist groups — with some members of such groups even joining the government — discussing efforts to punish sanctuary cities or to promote false narratives about immigrant criminality. 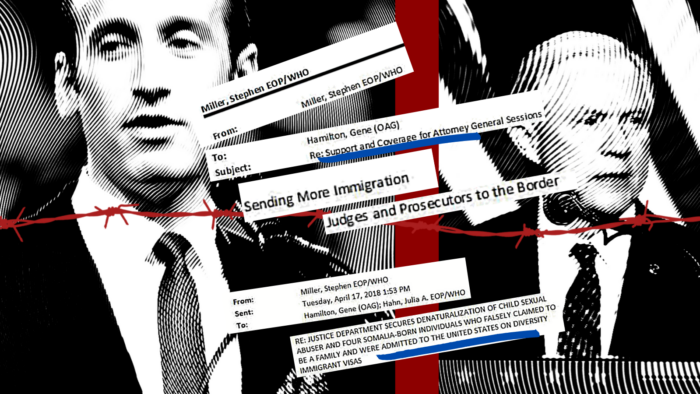 Some of the earliest records in the Justice Department cache show Miller’s involvement in the development and messaging around the executive order banning travel from certain Muslim-majority countries. In an email barely a week after the 2017 inauguration, Miller’s assistant invited DOJ White House Liaison Mary Blanche Hankey to an “Immigration Executive Order Implementation Meeting with Stephen Miller.” In another email on Feb. 19, Miller urged Sessions’ chief of staff to make sure the attorney general read the “latest draft” of an executive order. It is not clear what order was being discussed, but two weeks later, President Trump issued a revised travel ban.

Other emails show him working to help federal agencies coordinate with Republicans on Capitol Hill. On Oct. 16, 2017, Miller forwarded to a Sessions aide an email from a staffer for Rep. Mo Brooks. The staffer requested White House help in advancing a bill that would require the FBI to include statistics on immigration status of arrestees in its annual crime reports, in order to “put together as much information on the criminal tendencies of immigrants to effectively counter mainstream narratives.”

In some cases, Miller personally sought to highlight reports of incidents involving undocumented people to perpetuate a false narrative tying immigration to crime. In an email to a Hamilton in February 2018, Miller requested that officials “amplify” a news release about a U.S. attorney bringing immigration action against an undocumented person from Guatemala involved in a fatal highway car accident.

On May 18, 2018, Miller forwarded Hamilton an email from Maria Espinoza, the founder of the Remembrance Project, regarding a criminal investigation. The Remembrance Project is an anti-immigrant organization designated as a hate group by SPLC that regularly pushes false tropes painting immigrants as criminals or “invaders.” The year before, Miller had forwarded an email from Espinoza about sanctuary cities to another Justice Department staffer.

Other documents obtained by American Oversight suggest Miller on at least one occasion may have attempted to participate in on-the-ground enforcement operations. One email exchange from May 31, 2018, with ICE’s then chief of staff Thomas Blank referenced a “Fugitive Operations Ride- Along” in the subject line.

Beyond a sentence in which Miller offered “many thanks to the terrific men and women of ICE,” the content of the email exchange is largely redacted, leaving it unclear if a ride-along took place or who was involved. Other American Oversight records show the exchange happened while Miller was heavily involved in supporting the administration’s family-separation policy — days after he approved a White House statement about family separation and worked to organize a related meeting with officials from the Departments of Justice, Homeland Security, and Health and Human Services. 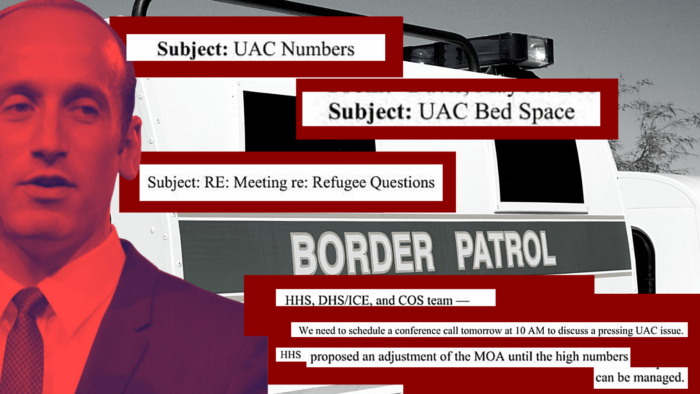 Our documents also show Miller’s assistant emailing on Nov. 30, 2017, to arrange a meeting on the topic for Miller, Bash, Zadrozny, and HHS officials.

About two months after Sessions’ April 2018 announcement of zero tolerance, Miller participated in an email chain with the subject line “Family Separation,” in which officials from the White House, HHS, DOJ, and DHS — including Katie Waldman, then a DHS staffer, who is now married to Miller — coordinated on a fact sheet about the controversial policy.

On Sept. 5, 2018, White House official and Miller ally May Davis sent an email to arrange a call the next day with Miller and senior staff at DHS and HHS about “a pressing issue” with unaccompanied immigrant children and potential adjustment to the related memorandum of agreement between the agencies “until the high numbers can be managed.”

News reports from that month showed the U.S. government was detaining a skyrocketing number of migrant children, and had lost track of hundreds of kids in its care. Six months later, in March 2019, Davis sent another email about bed capacity for immigrant children, copying Miller.

American Oversight is continuing to seek information about the development and execution of Trump administration immigration policies, including reports of coronavirus-related rapid deportations of minors without guardians.

As we learn more about the inner workings of the Trump administration, it’s all the more clear that this dark period for our democracy requires continued substantive review to expose those responsible for the abuses carried out by the U.S. government.

In the Documents: Stephen Miller Emails with Justice Department Official About Anti-Immigration Measures
Department of Justice

Photos from Inside Detention Centers for Migrant Children
Department of Health and Human Services, HHS - Administration for Children and Families, HHS Office of the Inspector General

News Roundup: More Troops at the Border Means More Questions for the Administration
Department of Defense, Department of Homeland Security

News Roundup: The Administration’s Misleading Claims About Terrorists at the Southern Border
Department of Homeland Security

Countdown to Oversight in 2019