American Oversight submitted a brief on Friday challenging an argument from the U.S. Postal Service that could vastly expand what the agency can hide from the public and that was used to justify the near-complete redaction of Postmaster General Louis DeJoy’s calendars, which were produced in response to our Freedom of Information Act lawsuit.

DeJoy was a major fundraiser for then-President Donald Trump before he was appointed to lead the U.S. Postal Service in June 2020. His appointment came at a time when the agency was poised to be a key part of U.S. election infrastructure, thanks to increased demand for absentee voting during the Covid-19 pandemic.

The calendars requested by American Oversight cover a contentious period of DeJoy’s tenure that was marked by controversial decisions, such the removal of mail-sorting machines and limits on overtime for USPS employees, which reduced capacity and increased delays during the run-up to the election. Those changes raised serious questions about political interference at USPS during these months.

Calendars of public officials are regularly released in response to FOIA requests, but USPS initially argued that DeJoy’s calendars were personal, rather than government records — despite his calendar cataloging government business and being hosted on government computers. After American Oversight sued for the records, USPS agreed to produce DeJoy’s calendars after redacting exempted content.

But when USPS finally turned over the calendars, the records — including more than 1,000 entries — were almost entirely redacted.

The agency also failed to specifically identify which exemption justified each redaction, as is generally required by the law. USPS first broadly attributed the redactions to exemptions 3, 5, and 6, which cover commercial information, deliberative processes or protected attorney-client communications, and private information, respectively. In attempting to justify its redactions to the court, USPS didn’t explain its reasons for redacting each entry individually — as is standard practice — and instead said that the redactions all fell within one of 12 vague, broad categories. USPS did not even identify which calendar entries fell within which categories.

USPS does have a specific exemption under FOIA addressing commercial concerns, because it competes with private-sector carriers like UPS and FedEx. But applying that narrow exemption in the extraordinarily broad way that USPS has attempted to do with DeJoy’s calendars threatens to vastly expand what the agency could hold back in the future. Moreover, that argument is a whiplash from the agency’s past position that the calendar was not releasable because it contained DeJoy’s “personal” records. 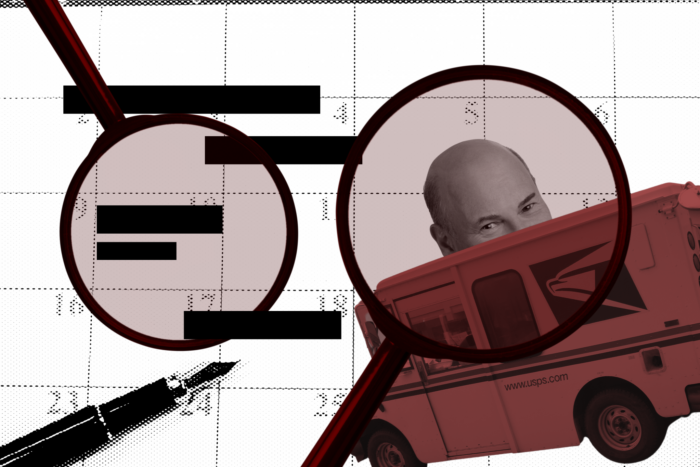 “USPS’s radical arguments, if accepted by this Court, would convert specific, narrow FOIA exemptions into a blanket exemption for virtually any USPS record,” explains American Oversight’s brief, filed in the U.S. District Court for the District of Columbia.

The agency’s approach to DeJoy’s calendars also ignores the requirement that the commercial information exemption cannot be applied to records related to USPS’s public or governmental functions, such as calendar entries related to DeJoy testifying before Congress or his work on issues like voting by mail.

American Oversight’s request for DeJoy’s calendars is part of our larger investigation into potential political interference at USPS, both on behalf of the former president’s political interests and on behalf of private industry. We also requested records related to USPS appointees who had worked for DeJoy’s businesses before being hired by USPS, and this week obtained communications indicating that one of those staffers, Patrick Fiorentino, was informed in advance that his resume would be released, before it was eventually disclosed in heavily redacted form.

Our investigation into the federal pandemic response also uncovered USPS records showing a plan in the early days of the pandemic to mail every American household masks — the Washington Post reported that the plan was scuttled by the White House for political reasons.

Open Questions About the Jan. 6 Attack on the U.S. Capitol

Rooting Out Corruption in Government: What Will It Take?

Barr Continues to Comment on Ongoing Durham Investigation — Even as Justice Dept. Withholds Documents About It from Public
Department of Justice

Tips for Filing Public Records Requests in Your State or City