New documents turned over by Lev Parnas were released by the House of Representatives on Thursday. These records included communications with a pro-Trump super PAC official, a meeting with Trump in late September, and a meeting at the White House on March 24, during the height of the Yovanovitch smear campaign. The timeline below, of a week and a half in March 2019, has been updated.

On Tuesday, the House released new evidence provided by Lev Parnas, an associate of Rudy Giuliani, which include disturbing text messages that suggest former Ambassador to Ukraine Marie Yovanovitch’s movements were being tracked in March 2019 — at the same time that Giuliani was in contact with Secretary of State Mike Pompeo, as revealed in records obtained by American Oversight.

We lined up the newly released Parnas messages with the records we obtained from the State Department as well as other records and reports. The timeline is troubling.

Late in the night of March 19–20, Parnas had a received a message from Joseph Ahearn, an official of the pro-Trump super PAC America First Action. Ahearn asked Parnas, “What should I send don to tweet,” presumably referring to Donald Trump Jr. Parnas told Ahearn to wait until the next day, for “good stuff.” Parnas also sent a message to Thomas Hicks Jr., the co-chair of the Republican National Convention, saying, “Tomorrow’s the big day it’s going to break tomorrow.”

On the afternoon of March 20, Parnas sent a tweet from Fox News host Sean Hannity to Ahearn, with the message “Have jr. retweet it.” (That tweet appears to be unavailable now.) Parnas also suggested that Hicks retweet it.

This was the same day that conservative commentator John Solomon published at the Hill his interview with a former Ukrainian prosecutor general who accused Yovanovitch of having given him a do-not-prosecute list of investigations into corruption. (Those allegations have been proved false.) Parnas’s documents reveal a number of messages exchanged with the prosecutor, Yuri Lutsenko, during this time, and according to ProPublica, Parnas had been in the studio when Solomon interviewed Lutsenko.

In the spring of 2019, Giuliani and his allies had been unleashing a smear campaign against Yovanovitch. The first set of Parnas records include a number of WhatsApp messages from late March in which Parnas shared anti-Yovanovitch articles via WhatsApp with Robert Hyde, a Trump donor who was apparently assisting Parnas in Ukraine. On March 23, Hyde responded that he couldn’t believe President Donald Trump had not yet fired Yovanovitch and that “She under heavy protection outside Kiev.”

The next day, around noon EDT, Donald Trump Jr. tweeted about Yovanovitch, saying the U.S. needed “less of these jokers as ambassadors” and linking to an article about calls for her removal. Parnas shared the same article with Republican donor Harry Sargeant III, with the message “Believe me she is gondo call you soon.” (Sargeant had reportedly approached an executive of the Ukrainian state-owned gas company with Parnas about a gas deal.) About 20 minutes after the president’s son tweeted (4:34 p.m. UTC), Parnas sent Hyde the same article. 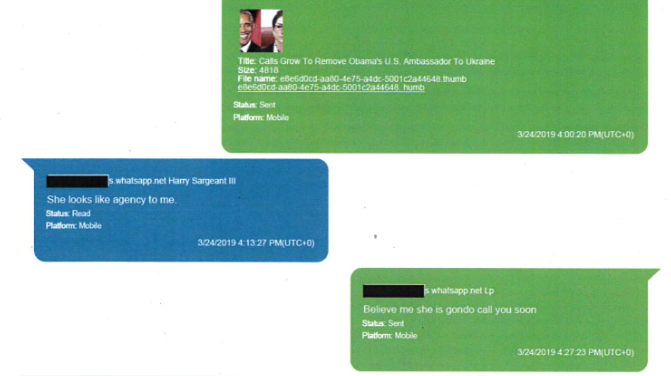 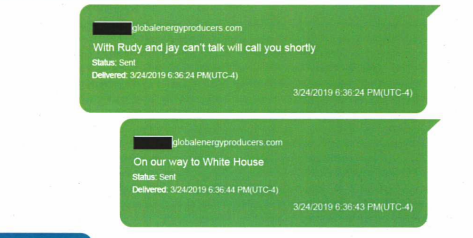 The Associated Press reported that on this day, Giuliani and Parnas met at the Trump International Hotel in Washington, D.C., with Healy E. Baumgardner, a former Trump campaign adviser who had also previously worked for Giuliani’s presidential campaign.

Parnas posted on Instagram from the Trump International Hotel, where he was with Giuliani for a dinner celebrating the release of the Mueller report summary.

At that same time, Hyde messaged Parnas (around 2 a.m. the next day Ukraine time) suggesting he had Yovanovitch under surveillance. The series of messages include the following texts: 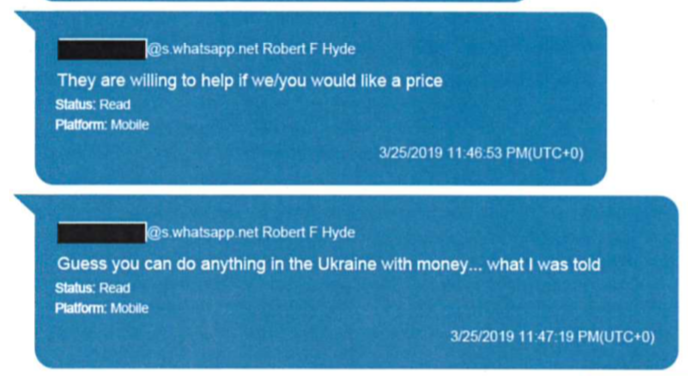 The next morning in Washington, about 14 hours later, call logs obtained by American Oversight show Giuliani spoke with Pompeo.

Just after midnight Ukraine time, Hyde again messaged Parnas about Yovanovitch, saying that his “contacts are asking what is the next step.” “If you want her out, they need to make contact with security forces. … From Ukrainians.” Parnas’s message a couple of hours later — “Call you soon in studio” — suggests that Parnas was with Giuliani during the Ingraham show. 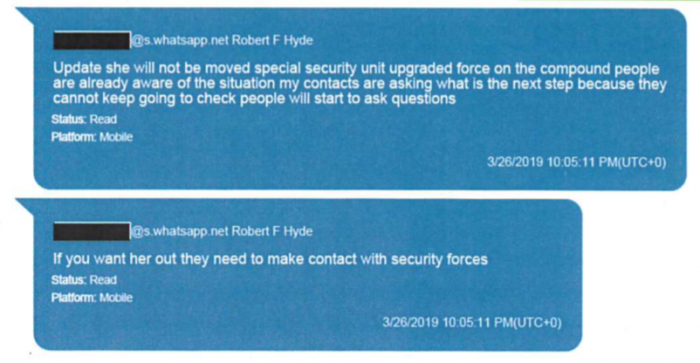 At 11:28 a.m. EDT, Giuliani’s assistant contacted Trump’s Oval Office secretary, Madeleine Westerhout, asking for help getting in touch with Pompeo. “I’ve been trying and getting nowhere through regular channels.”

Later that night, Hyde messaged Parnas about Yovanovitch again: “Nothing has changed she is still not moving.” “It’s confirmed we have a person inside.”

The next morning, before 9:30 a.m. EDT, Giuliani called the State Department to set up a call with Pompeo. According to emails we obtained, the call was scheduled for the next day.

According to news reports, March 28 was also the day Giuliani delivered the “packet” he had compiled about Yovanovitch — including the email Solomon had sent to Parnas two days earlier.

At 3 a.m. Ukraine time, Hyde messaged Parnas, saying, “She had visitors” and, again, “It’s confirmed we have a person inside.” 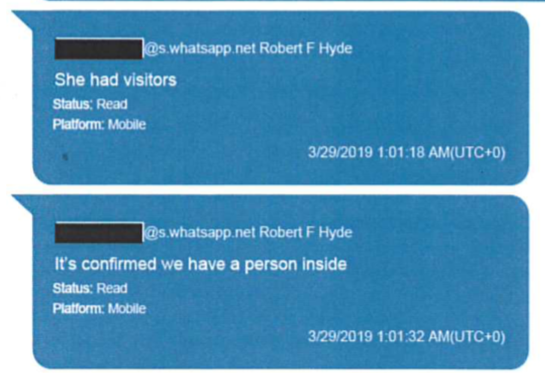 Just under 12 hours later, at 8:14 a.m. EDT, State Department call logs show that Giuliani spoke on the phone with Pompeo for several minutes.

This gets more concerning when you consider the records and reports of contacts with Rep. Devin Nunes, the ranking member on the House Intelligence Committee, regarding investigations of the Bidens. According to CNBC, Nunes’ staff was in contact with Parnas and Ukrainian officials in “late March.” Pompeo’s call schedule, which we obtained through our FOIA lawsuit, shows a call with Nunes scheduled for April 1 — listed immediately after the March 29 call with Giuliani.

All of this calls into question Pompeo’s knowledge of the events unfolding in Kyiv and the eventual ouster of Ambassador Yovanovitch. The State Department documents American Oversight obtained in November also showed that the administration had misled members of Congress about Yovanovitch’s removal, telling them she had been “due to complete her three-year diplomatic assignment.” Documents we received this month in that same lawsuit show that the State Department instructed Yovanovitch’s lawyer to stop her from testifying in the House’s impeachment inquiry. You can see all the records we have obtained in our Ukraine-related lawsuits here.

Watchdogs Call for Investigation of Sen. Ron Johnson’s Abuse of His Office for Political Ends
Congress

New Lawsuit: Politicization of the Nation’s Top Intelligence Office
Office of the Director of National Intelligence

Records from U.S. Trade Office Show Communications with Trump Adviser Who Claimed to Have Dug Up Dirt on Bidens on Trip to China
White House - Office of the U.S. Trade Representative

The Facts Are Still Coming Out
Department of Defense, White House - Office of Management and Budget

Statement on Senate Impeachment Vote: Oversight Must and Will Continue
Congress

In the Documents: Investigating the Trump Administration’s Legal Analyses for Potential Use of Force Against Iran
Department of State

How ‘Sharpiegate’ Turned a Simple Misunderstanding into a Media Frenzy — and Headache for NOAA Employees
Commerce - National Oceanic and Atmospheric Administration, Department of Commerce

What We Learned from the Yovanovitch and McKinley Transcripts
Congress, Department of State

Statement on Waiver of Environmental Regulations for Border Wall